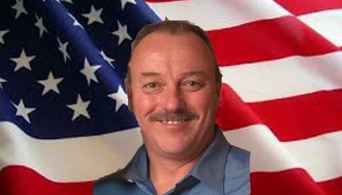 April 7, 1961 ~ February 28, 2014
Operation Enduring Freedom
157th Operations Support Squadron
NH Air National Guard
52, of Salem NH; died of natural causes at Al Udeid AB, Qatar.
Dave was born in Woonsocket, RI, grew up and was educated in Blackstone, MA, where he graduated from Blackstone-Millville Regional High School. Dave served in the Air Force for 22 years and also worked for the US Post Office for 13 years. He was appointed postmaster of Atkinson NH in October 2012. Atkinson Town Clerk Rose M. Cavalear said Postmaster Poirier was “a well-respected man by all who knew him.” “When I had the pleasure to speak with him, no matter how busy he was he was always personable and willing to help with any problem.”

David was very proud of his country and was very proud to serve. He was assigned to the 157th Operations Support Squadron, based out of the Pease Air National Guard base in Portsmouth. He had previously completed tours in Iraq, Afghanistan, Guam, Qatar, and El Salvador, in addition to other Guard missions in New Hampshire. He was serving his sixth tour overseas as a member of this guard unit and had just arrived in Qatar, according to his Facebook page. “I finally made it to my new job,” he wrote. “Now the fun begins.” 1st. Lt. Aaron McCarthy, executive officer of the 157th Air Refueling Wing, said “Master Sgt. Poirier will be sorely missed. He was a part of our unit for over 19 years and has been a mentor to many and a friend to all.” His selfless participation to support our home and off-station airshows over the years has been essential to inspiring youth and educating the public.” Dave was the consummate guardsman, said his commander Lt. Col. Paul Kell. “He was a technical expert in his career field, he had a gift for teaching others, he volunteered for every deployment, and he was the first one through the door during state activation in time of crisis.” “Here he trained to the level of aircrew life support craftsman serving as the NCOIC of every section where he was instrumental in leading, teaching and mentoring airmen in the shop,” said Chief Master Sgt. Michael Bascom, Life Support superintendent. “He was an incredible role model for junior NCOs,” said Tech. Sgt. John Bober, a crew chief with the 157th Maintenance Group who deployed with Dave last year in support of a Pacific Command mission.

Dave enjoyed the outdoors by taking camping and fishing trips throughout New England. He also took particular pleasure in riding his Harley-Davidson on the back roads of New Hampshire. Most of all, Dave loved spending time with his family, entertaining them with magic tricks and card games.

His awards and decorations include the Air Force Commendation Medal (twice), Campaign Medals for Operation Enduring Freedom, Operation Iraqi Freedom, and the Global War on Terrorism, as well as other awards. * If you have more information on Dave’s awards please contact us.