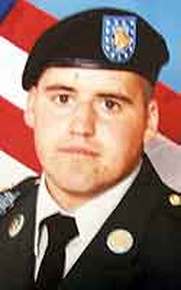 February 17, 1980 ~ January 24, 2004
Operation Iraqi Freedom
Company B, 1st Squadron, , 9th Calvary,
Task Force All-American, Fort Hood, TX
23, of Berlin, NH; killed in action when a vehicle-based improvised explosive device detonated in Khalidiyah, Iraq.
Randy was raised by his grandfather, William, a Korean War veteran. William remembers his grandson as a ‘big, husky fellow and a great fly-fisher, liked by all.” Randy was a 1998 graduate of Berlin High School, where he played hockey and baseball. After graduation he followed in his grandfather’s footsteps and joined the Army. He was a soldier who carried kindness and candy with him, marked his Bible with a “Sugar Babies” candy wrapper, and wore his cap backward when he wasn’t on duty.

When Randy’s wife, Misty, left New Hampshire to be with her husband at Fort Hood, Texas, she told her worried sister Melissa nothing could go wrong. "I know it will work because I found my true soul mate," The couple had been married for only 18 months when Randy was killed by a car bomb in Khalidiyah, Iraq. It was his second tour of duty.  “He had the ability to make anyone laugh or smile, even at his own expense. He died serving his country -- something he always believed in", Melissa says of her brother-in-law.

Randy completed Basic Training and Advanced Individual Training at Fort Benning, GA and was assigned to Fort Hood, TX, in March 1999. He was often called Rosey by friends and fellow soldiers. They remember him as a “good NCO that cared for his guys, and was a good friend to those who didn’t know the ropes.” “Rosey “ knew how to talk to everyone and was liked by all who met him.

Randy is survived by his wife, Misty, his mother and stepfather Sandy and Rick Fournier , his sister Tanya, maternal grandfather Saul Rosenberg, and his maternal grandmother, Shirley Gemitti, and her husband, William Gemitti, a veteran of the Korean war.