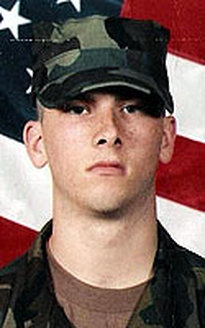 August 14, 1982 ~ October 13, 2004
Operation Iraqi Freedom
4th Battalion, 5th Air Defense Artillery Regiment, 1st Cavalry Division, Fort Hood, TX
22, of Littleton, NH; killed in action when an
improvised explosive device detonated near his
patrol in Baghdad, Iraq.
Jeremy called home weekly and had just celebrated his birthday in Littleton in August 2004 while home on a two-week leave.
Jeremy joined the National Guard in 2000 and following basic training and a tour in the Guard, he joined the regular Army. Jeremy hoped to become a helicopter mechanic and make a career in the Army. He had dropped out of Littleton High School after the 11th grade, but earned an equivalency diploma while working manufacturing jobs. “He didn’t want to end up on Main Street,” his aunt Judy Ash said. “He wanted to better himself.”  Jeremy was a Bradley Vehicle Crewman. He was assigned to various units, eventually joining the 4th Battalion, 5th Air Defense Artillery Regiment, 1st Cavalry Division. He served a tour in Korea, and then deployed to Iraq in March 2004.

Jeremy’s family moved to Littleton from Agawam, MA. His parents said they wanted to raise Jeremy and his sister Amanda in a more secure environment. His father owned and ran R&L Siding and Remodeling in Agawam and later became an assistant projects manager there for Six Flags New England. Jeremy worked for his father's contracting business.  “When we worked together it was cats and dogs,” his father Kevin Regnier said. “We’re both stubborn.” But he said he shared a tight bond with his son. When his son asked him to go deer hunting once and he said he couldn’t because he didn’t have a rifle, his son bought him one. “He’d give you the shirt off his back,” he said. “He’d do anything for anybody.” Jeremy always told his family not to worry, relatives said.