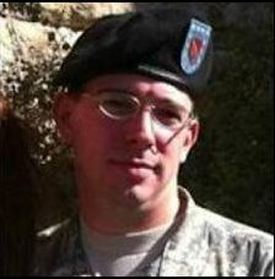 June 6, 1984 ~ June 6, 2011
1st Battalion, 7th Field Artillery Regiment
2nd Heavy Brigade Combat Team, 1st Infantry Division
Fort Riley, KN
27, a Salem H.S. graduate; killed in action when enemy forces attacked his unit in Baghdad, Iraq.
Michael - killed on his 27th birthday - was among five soldiers killed when rockets struck the joint U.S./Iraqi military base called Camp Loyalty in Baghdad. At that time, the attack was one of the largest, single-day loss of life for U.S. forces in Iraq in the past two years. Mike and Samantha lived together in New Hampshire and Ohio before moving to Kansas. He joined the Army in October 2009 and served as a field artillery tactical data systems operator. He had been working with computers before getting into the military and enlisted as a way to pay for his education and serve his country.
​
Mike left behind a lot,” said Susan Bahraki a family relative. “He was a very devoted father and a loving brother and he loved his parents so much.”

Mike is remembered as a charismatic, intelligent man who was always willing to help others.
​
Mike served as an automated field artillery tactical data system specialist with Battery B, 1st Bn., 7th FA Regt. As one of the older soldiers in his unit, he served as a kind of mentor to the younger Soldiers. "Spc. Cook was an excellent battle buddy," said Pfc. Marquis Davis, also with Battery B and an Enterprise, Ala., native. "His ability to teach, listen and work with other Soldiers was outstanding and I was impressed and inspired to become a better Soldier every day." Cook had the tools of his trade down pat, Davis said. "Cook was a genius and he knew the system like clockwork, and whatever he could do to become better he would do it."

"He always had a smile and was always positive," said Curtis Killion, Cook's computer science teacher at Salem High School. Killion and Superintendent of Schools Michael Delahanty recalled how Cook was the type of student who always stood out."He was very bright," Delahanty said. "There are some kids who stand out, and Michael was one of those kids." Although it's been nearly a decade since Delahanty was principal of Salem High, he clearly remembered Cook's fondness for computers while he was a student at the school.

Killion told of how Cook volunteered to put together a yearbook for the district's elementary school students. "He would always volunteer," Killion said. "He was the kind of kid that all the younger ones were comfortable with."
Cook's two siblings were also students in the Salem school system. Delahanty also remembered Cook for his engaging personality, an important trait for someone sent to Iraq as an adviser. "Michael had one of those personalities that would bridge any communication gap," Delahanty said.
​
Marilyn Chirichiello, who lived next door to the family for 13 years, said the Cooks were great neighbors and always there for others. Chirichiello said she last saw Michael last year when he came to visit his family. Speaking about Patti Cook, Michael's mother, Chirichiello said, "She used to say he was the perfect son."
He entered the army in October 2009 and was assigned to the 1st Battalion, 7th Field Artillery Regiment, 2nd Heavy Brigade Combat Team, 1st Infantry Division, Fort Riley, Kansas.

He is survived by wife, Samantha Mitchell-Cook, his two children, Hailee and Michael III; his parents Michael Sr. and Patti Cook; his brother Lucas and sister Kimberly; grandparents Beatrice Mitchell-Cook, the late Benjamin Cook and his extended family.