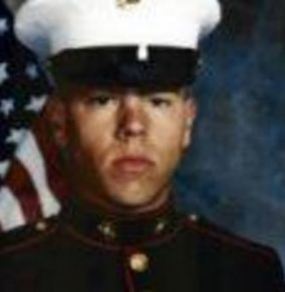 February 26, 1975 ~ February 25, 2003
Operation Iraqi Freedom
B Company, 5th Battalion
158th Aviation, Aviano Air Base, Italy
27, of Webster, NH;  died in a helicopter crash during a training exercise in Kuwait.
Bill was born in Haverhill, MA, the son of William J. Tracy, Sr., and Dianne Childs. He grew up in Weare and later moved to Webster, NH. He graduated from Merrimack Valley High School in 1993. Bill spent one semester pursuing his love of art at the local school of technology before enlisting in the Marines in 1995. After four years in the Corps, he returned home for a short time before joining the Army to fly helicopters.

Bill was stationed at the Aviano Air Base in Italy. He was a crew chief, his job was to fix aircraft on the ground and help pilots navigate in the air. He was on a night training exercise, when his Blackhawk helicopter crashed on the Shomali Plains about seven miles due east of Bagram Air Base. The exercise was a long-range reconnaissance, practicing use of NVGs in desert and flew into ground during sandstorm over the desert. The team was training to drop soldiers into Iraq in the days leading up to the invasion.

Bill was a true soldier, volunteering for every mission. His deployments ranged from Atlas Drop Tunisia, Flintlock Mali, Strong Resolve, Norway; Lariat Response, Hungary; Victory Strike III, Poland; and Enduring Freedom Kuwait. He loved to travel and rarely stayed home on weekends. Bill and friend Chief Warrant Officer 2 J.D. Smith (also killed) had volunteered for duty in Kuwait, and both insisted on staying on even after replacements had arrived for them from Germany. “Both of these guys volunteered to be with you,” Company B commander Maj. Chris Speer said. “That speaks volumes about them.”

Bill had done six deployments in 3½ years with the 5-158 Aviation, extending with the unit last fall so he could move from Germany to Italy. He racked up more than 500 hours as a crew chief, an impressive number for such a short time. He was close to achieving his goal of making sergeant. “He went out on every single mission,” said Capt. Michael Cushwa, 25, a Company C pilot. “He wanted to be there, where the action was.”

Bill was a happy-go-lucky guy who loved to fish and always had a fascination with flying. One of the things he learned to love the most about the military, was meeting people from around the world. He said he learned to bring toys and things with him for the people, so they would know that the U.S. Soldiers are good people and that the United States is a good country.

Bill hadn't been home since Christmas of 2001, but he always remained close to his family through e-mail and long telephone calls. He told his dad, he wanted to be an Ambassador for America.

*If you have information about Bill’s awards and decorations, please contact us.