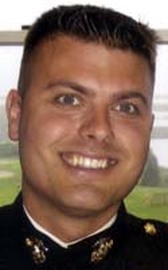 April 14, 1980 ~ October 26, 2009
Operation Enduring Freedom
Marine Light Attack Helicopter Squadron 169, Marine Aircraft Group 39,
3rd Marine Aircraft Wing, 1 Marine Expeditionary Force, Camp Pendleton, CA
29, of North Attleborough, MA; killed killed in action by a collision between a UH-1
and an AH-1 helicopter in Helmand province at FOB Dwyer, Afghanistan.
The Capt. Kyle R. Van De Giesen Memorial Award Fund
​After his family, the thing Kyle loved most was the Marine Corps. As a boy, he had been fascinated by helicopters and was thrilled to be flying for the Marines. At St. Anselm College, he enrolled in an officers training program and was commissioned as a second lieutenant two weeks after he graduated in 2002. He felt it was his calling.
He excelled in flight school and got his first pick: to fly Cobra helicopters on the West Coast. To prepare for deployment, he would fly day and night, in all kinds of weather. His favorite route was up the coast over the water, where, he told his wife, Megan, he could spot sharks. The military life, with its structure and discipline, suited him. He liked precision; his DVDs were in alphabetical order, his closet pristine.

As a senior in college on Sept. 11, 2001, he called his mother, distraught, as he watched the terrorist attacks. “Why can’t anyone do something to stop this?’’ he asked her. He was already headed for a military career, but the events of 9/11 gave him more motivation.

Kyle met his wife Megan at a game of ultimate Frisbee the summer he graduated from college. When he trained in Florida and California, she accompanied him. In October 2006, as they sat on the beach near Camp Pendleton, he proposed. Ten hours later, he left for Iraq. They married when he returned the following May.

Five months later, just as Megan learned she was pregnant, he deployed again to Iraq. Kyle was able to return home for the birth our his daughter Avery. He was delighted with fatherhood, prancing around the squadron room with Avery to show her off. As he was about to leave for Afghanistan, the couple learned that they were expecting another baby.
Megan was counting on her husband to be home from his seven-month deployment in Afghanistan for the birth of their second child. Kyle had flown his last mission and couldn’t wait to be home, either.

Upon his return, the family planned to move to Yuma, AZ, where he had been chosen for the prestigious post of teaching weapons and tactics at the Marine Corps Air Station. It was, his mom RuthAnn notes with pride, the Marine equivalent of “Top Gun.’’

On a Thursday night in October 2009, Megan and Kyle were able to Skype. “He asked me to lift up my shirt so he could see my belly,’’ says Megan. “He could also see Avery running around, building with blocks. She said, ‘Hi Daddy!’ ’’
Three days later, Megan was awakened at midnight to six Marines knocking at the door of the couple’s apartment near Camp Pendleton. Kyle had been killed in a helicopter crash in Helmand province, Afghanistan. The family would later learn that he had been asked at the last minute to fill in for another pilot on a night mission.

Four days after Kyle was buried his son, Colin Joseph, was born. He is a miniature of his dad, down to the cowlicks on each side of his head.  Megan and the children live not far from Kyle’s father, Calvin and the children are often at Kyle’s mother’s home, where Kyle grew up with his two brothers and sister.

Both Calvin and RuthAnn have found solace in the grandchildren and, along with Kyle’s siblings, see them often. It is, says his mother, the one blessing.

“We have beautiful children to raise and take care of, and for that we are grateful,’’ says RuthAnn, who keeps Avery and Colin every Thursday night and Friday, Colin sleeping in his father’s old bedroom. “We have babies to raise. We have to stay happy.’’

To Kyle, war was his job. He felt he was protecting his family and his country. “He loved every single moment of being in the Marine Corps,’’ says his father Calvin Van De Giesen. On his left wrist, wears an orange rubber bracelet that says: “KRV-Our Hero Forever.’’ He never takes it off, even when ordered to during a recent surgery. “He died doing what he loved and in his mind, it was all good,’’ says Van De Geisen.

“It’s all good,’’ was the phrase Kyle used with his loved ones, to reassure them that things were going well.
Avery, his daughter, would point to helicopters overhead and say, “That’s my daddy!’’ She won’t go to bed without kissing her father’s picture. Already, his son Colin cocks his arm and releases a mini-football; his father was a star quarterback at North Attleboro High and St. Anselm College.

His mother keeps a couple of “It’s all good,’’ signs in her home, and says she was at peace when she learned of his death. “Everything he wanted to accomplish, he had accomplished. He was flying, he had the wife he wanted, he had the babies. I could hear him saying, ‘Mom, it’s all good.’ ’’
The entire family finds meaning in the Captain Kyle Rolf Van De Giesen Memorial Award Fund, which supports students who uphold the Marine Corps values of honor, courage, and commitment.

Kyle was a 2002 graduate of Saint Anselm College in Manchester, N.H., where he was quarterback of the football team, which was re-established after a 58-year hiatus. He received his Bachelor of Arts degree in criminal justice.
​
After completing Officer's Candidate School in Quantico, Va., in the summers of 1999 and 2000, Kyle was commissioned as a second lieutenant, USMC in 2002. The ceremony was held at the Joseph W. Martin School, where Kyle attended grammar school. Upon completion of the Officer Basic Course in Quantico and Flight School in Pensacola, FL, Kyle graduated in 2004 with his Aviator wings and assignment to train as an AH-1W Super Cobra pilot. He was assigned to HMLA-169 at Camp Pendleton in California. Kyle was deployed twice to Iraq and then to Afghanistan. He was hand-selected to be a Marine Aviation Weapons and Tactics School Squadron One (MAWTS-1) instructor, the Marine Corps' center for aviation excellence and tactical instruction, commencing June 2010.