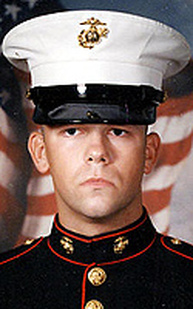 June 17, 1984 ~ November 28, 2004
Operation Iraqi Freedom
1st Battalion, 2nd Marine Regiment, 2nd Marine Division, II Marine Expeditionary Force, Camp Lejune, NC
20, of Manchester, NH; killed in action by enemy fire in Babil province, Iraq.
Adam was born in Manchester,  the son of Rose  (Brooks) Marois and Robert Dubois. He was related to the Brooks  family of Colebrook and surrounding towns. Adam was a 2003 graduate of Central High School. He enjoyed bike riding, drawing, and basketball, but those who knew Adam at high school remember his true passion was  his love for the Marine Corps and recall his enthusiasm for joining the service. “The minute he decided what he wanted to do, there wasn’t any stopping him,” said a support professional at Central.

His family says he was determined to right the wrongs of the Sept. 11 terrorist attacks. When he was in school, he often talked with recruiters. He worked especially hard to lose 67 pounds from his 5-foot-8 frame before and during boot camp to be the best Marine he could be.

Adam and his wife Ashley married on Memorial Day in 2004, during his last leave. They married so that when he was in battle, he’d have something to hold onto.  After he got back from the war, he would become a state trooper and she would attend cosmetology school.

Sadly, the couple marked their six-month anniversary on Nov. 28,2004,  the day Adam was killed in a hostile attack.. . Adam had been able to call her for their anniversary and they spoke for about 20 minutes. "I think he thought he could make a difference, no matter what it is," Ashley said. "He was a really strong man to sign up and help his country, even if it means losing his life. I'm very proud of him."

Adam was a member of Bravo Company, Battalion Landing Team 1st Battalion, 2nd Marines. On December 12, 2004, at Forward Operating Base Iskandariyah, Iraq, friends of Adam remembered his nickname, which was something that had always made them laugh or break a smile - Homer Simpson. The name was give to him by Lance Cpl. Carlos Miranda, a gunner from Queens, N.Y., as sort of a rite of passage into the platoon. "He was like a cartoon character," recalled Miranda who passed out nicknames to his other fellow Marines.

"It was his laugh he got it from," added Lance Cpl. Phillip Clinton, a saw gunner from Knoxville, Tenn.
Another distinction that earned Adam notoriety in Iraq was the constant stream of packages from his loved ones, so many in fact that the packages barely fit under his bed. "His boxes always had countless amounts of food in them, and one time he got a big variety of cigars," said Clinton. "We used to say his wife spent all of his paycheck on it." Adam would often invite his fellow Marines to take what they wanted from the mail.  "He would get packages, like three packages at a time from his wife," said Clinton. "He had a small PX under his rack."  He was always happy to give his fellow Marines items of food or hygiene products.

Adam reported to recruit training at Marine Corps Recruit Depot Parris Island in August 2003. Following his basic training, he volunteered for and received further training as a rifleman in the infantry. Upon completion of this training, he became a member of 1st Battalion, 2d Marines, 2d Marine Division. From this unit's home base in Camp Lejeune, NC, he deployed to Iraq. .

His awards and decorations include the Purple Heart Medal, the National Defense Service Medal, the Global War on Terrorism Expeditionary Medal, and the Sea Service Deployment Ribbon.

Memorial donations in Lance Cpl. Adam Brooks' name may be made to  the Manchester Community Resource Center, 177 Lake Ave.,  Manchester 03103.

He is survived by his wife Ashley (McDonald) Brooks; his  mother Rose Marois; two sisters Teri Nordstrom and Charlene Reynolds and his extended family.