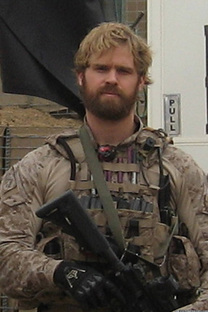 December 28, 1978 ~ February 4, 2008
Operation Iraqi Freedom
Naval Special Warfare Development Group (Seal Team 6)
FTC Dam Neck, Virginia Beach, VA
29, of Durham, NH; killed in action during an assault on an Al Qaeda bomb cell in Diyala, province, Iraq.
Operation Hat Trick
Submitted by his family:
As early as the sixth grade, Nate Hardy wrote a paper about becoming a Navy SEAL. Through his years on the soccer and lacrosse fields he discovered and developed the fierce competitiveness and team-first mentality that would later serve him well on the road to achieving his goal. In his senior year at Oyster River High School, he was selected by the New Hampshire soccer coaches to the all-state second team. He was also elected by his teammates as a co-captain of the ORHS Boys Lacrosse team.
In November 1997, five months after graduating from ORHS, he enlisted in the United States Navy and began his SEAL journey, which included graduation with BUD/S Class 221, three deployments with SEAL Team Eight, completion of the eighteen month course in Arabic at the Defense Language Institute, successful screening and selection as the “number one draft choice” to the elite Naval Special Warfare Development Group (aka SEAL Team 6), and a final deployment with DevGru KILO Team. He was killed in action against an al Qaeda suicide bomb cell on 4 February 2008.

His life was fulfilled in his marriage to Mindi Buck on 4 June 2005 and the birth of their son Parker on 16 July 2007. He was buried at Arlington National Cemetery on 15 February 2008.