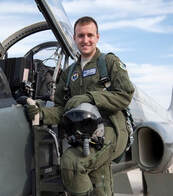 Ryan was born in Nashua on June 4, 1989, son of Donald and Nancy Phaneuf of Hudson. Graduating from Presentation of Mary Academy in 2003, Ryan attended Alvirne High School, where his interest in the Air Force grew. He was an inaugural member of the AFJROTC at the school and was an active part of every new venture the group undertook. Ryan was a mentor to many underclassmen, giving one on one attention to fellow students who needed help. In 2006, Ryan was in the top 1% of 110,000 JROTC cadets worldwide and was selected to attend the Aerospace & Technology Honors Camp at the University of Oklahoma and Tinker AFB. In 2007 he was nominated to attend the National Youth Leadership Forum on Defense, Intelligence and Diplomacy in Washington DC - an opportunity that less than 1% of all high achieving high school students are presented with!  During his senior year at Alvirne, in recognition of his demonstrated exceptional leadership ability, the departing Class of 2006 unanimously decided that Ryan should be promoted to the highest rank offered in AFJROTC: Cadet Colonel.
After graduation from Alvirne, Ryan attended the Embry Riddle Aeronautical University in Daytona Beach, Fl. Graduating in 2012, with a degree in BS in Applied Meteorology, he was commissioned as a 2nd LT, and began flight training that summer at Laughlin AFB, TX. Graduating from pilot training in April of 2014, he was selected as a FAIP, and began a tour as a flight instructor at the 85th Flying Training Squadron at Laughlin, in the T-6A aircraft. While there he served as assistant chief of training, training officer, flight scheduler and category check pilot. In June 2017, Ryan was assigned to Dyess AFB, TX, where he joined the 28th Bomb Squadron to learn to fly the B-1B Lancer. Ryan finished B-1B Basic Qualification at the top of his class, earning the title of Distinguished Graduate in June 2018. He was then assigned to the 37th Bomb Squadron at Ellsworth AFB in South Dakota. In November of 2019, Ryan completed school for the Bombardier E-11A Electronic Surveillance aircraft, before his voluntary deployment with the 430th Expeditionary Electronic Combat Squadron based at Kandahar Air Base, Afghanistan. Throughout his career, Ryan flew four different aircraft and amassed more than 1300 flight hours.

Ryan met his wife Megan, while on a cross country flight in pilot training, and they were married in November 2016.

Ryan was killed on January 27, 2020, in an aircraft mishap while flying a combined training and combat sortie in an E-11A in Ghazni Province, Afghanistan.

Ryan spent his life striving to be the best he could be and always wanted to help the people around him accomplish the same. As a genuinely humble person, Ryan is a true representation of small-town dreams coming true.