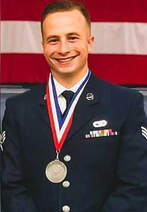 May 7, 1997 ~ September 14, 2020
Operation Inherent Resolve
42nd Aerial Port Squadron,
Westover AFB, MA
23, of Merrimack, NH; died as the result of an ATV accident at the Ali Al Salem Air Base in Kuwait.
RJ, as he was known, was born in Derry on May 7, 1997, to Kerry (Jones) Slade and Ronald Ouellette. Growing up in Londonderry, he graduated from Londonderry High School in 2015, joining the Air Force Reserves soon after. Known as a happy kid growing up with many friends, RJ came from a family of servicemen, and patriotism was in his blood. He is said to have possessed an instinctive desire to give and to serve.  A member of the 42nd Aerial Port Squadron at Westover ARB, MA, he was selected as the squadron’s Airman of the Month in October 2019. He was supporting the fight against ISIS in Iraq and Syria during Operation Inherent Resolve at the Ali Al Salem Air Base in Kuwait when he was killed in an ATV accident on September 14, 2020.

Col. Craig Peters, Commander of the 439 Airlift Wing at Westover said: “Ronald was a valued member of the Patriot Wing, and there are no words that can heal the pain his loss brings.”
​
His awards include the Air Force Achievement Medal, the Air Force Reserve Meritorious Service Medal, among others.