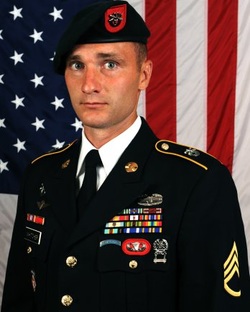 July 4, 1986 ~ November 2, 2016
Operation Enduring Freedom
Company C, 2nd Battalion, 1st Special Warfare Training Group
U.S. Army John F. Kennedy Special Warfare Center and School
30, of Bradford, NH; died in a dive training exercise off the coast of Key West, FL
David enlisted in the New Hampshire National Guard in 2008 as a carpentry and masonry specialist. He was a veteran of two deployments to Afghanistan as a member of the NH National Guard.

In 2013, he came on active duty and was assigned to the 6th Engineer Battalion, 2nd Engineer Brigade, Fort Richardson, Alaska.
​
David was married to Victoria and had a son, David Jr. Before he was stationed in Alaska, the couple together built a solar-powered, off-the-grid tiny house, which they towed 4,000 miles from the New Hampshire to Alaska.
In 2014, David volunteered for Special Forces training. He graduated from the Special Forces Qualification Course in 2016.

David is survived by his wife Victoria, son David, and his mother Kathleen, brothers Matthew and Danny Whitcher, Michael Robbins,  sisters April Messer,  Rebecca Whitcher and Ruth Koloski and his extended family. He was predeceased by his father, Horace "Bud" Whitcher in 2015 and one sister, Laurel Coronis.