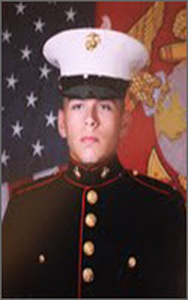 Deeply impacted by the 9/11/01 attack on America, Michael felt the burden to serve his country and to protect others. The Marines provided that opportunity. Michael began his Marine training while still at Pinkerton Academy. What others never saw about Michael was that he worked out every day, before and after school, in good and bad weather, even when he wasn’t feeling well. It’s what Michael did behind closed doors that made all the difference in his life.
According to his recruiter, SSgt Jose Vera, “When he first came in and told me, ‘I want to be a Marine,’ he was out of shape and at the back of the pack. Even though he started at the bottom, he proved everybody wrong. Michael had a strong sense of duty. When I tried to persuade him not to do Infantry and take my job as a recruiter, Michael would always respond, ‘No, I want to be in the Infantry. I want to serve my country the best way I can.’” By the time of his enlistment, Michael had grown into a leader who encouraged many other young men and women to excel. According to SSgt Vera, “If it wasn’t for Michael, some of these people wouldn’t be Marines too.”

After graduating from Pinkerton, Michael fulfilled his lifelong dream to serve his country in the Marines. Upon completion of his Marine training, Michael returned to his former school in full dress uniform to show his teachers he had achieved what he set out to do. He had plans to become a police officer when he got out of the service, reflecting Michael’s protective nature. Teacher Paula Vaughn said Michael was someone who made people laugh and whose smile would “light up the room,” while Michael’s English teacher, Joseph Dion, described him as “a young man people admired for his conviction and his accomplishment.”

Michael was assigned as a rifleman to the 2nd Battalion, 9th Marine Regiment, 2nd Marine Division, II Marine Expeditionary Force out of Camp Lejeune, North Carolina. He began serving his first tour of duty in Afghanistan in July, 2010, and was due to return home in February, 2011. Michael made the ultimate sacrifice during a combat operation in northern Marjah, on December 8, 2010.
To all who knew him, Michael was fun‐loving, always able to bring a smile to the faces of those around him, no matter what the circumstances. The Marines who served with Michael always talked about how his attitude and sense of humor helped them to get through the tough days. But when it mattered, they also said he was an exemplary Marine, who excelled under fire. Michael never wanted others to worry. Whenever he called home, whether from a grueling training exercise or overseas in action, Michael would always greet his mother with “Hey Mom! I’m doing fine.” and speak with an upbeat tone as if he were in the next room planning a night out.
After his passing, story after story emerged about Michael encouraging others. There was the girl in math class who always looked sad. Michael decided to send her an encouraging text message every day that year to cheer her up. There was another girl whom Michael encouraged to leave her boyfriend who mistreated her. Michael helped her to see herself in a new light and not to lower her standards for anyone. After Michael’s passing, she wrote a letter to Michael which ended with, “The night I got home from your wake, I finally left him. Michael, if you could only see me now. You would be so proud.”

Perhaps no story better exemplifies Michael than at Christmas in 2009. Michael had given his own Christmas leave away to another Marine who had a family. At the last moment, Michael was also given leave for the holiday. He traveled all night so that he could surprise his mother at her place of work. The ensuing scene, where Michael popped out of an adjacent office as his mother returned from her break is one that will never be forgotten by any who were there to see the tearful reunion…and of course, the beaming smile on Michael’s face.
Throughout his life, Michael was surrounded by a tightly knit group of aunts, uncles, and cousins, in addition to his mother and grandmother. Michael became particularly close to his cousin, Luke Douglas, for whom he became both older brother and mentor. A quiet freshman, Luke was frequently awakened early on weekend mornings by Michael dragging him from bed to take him on one adventure after another. Michael gave Luke confidence and motivation to become a straight‐A student. The college scholarship Luke eventually earned would have made Michael beam with pride.
Michael’s family, while heartbroken at the loss of our one so encouraging and kind to others, is at the same time proud of the man that Michael became and thankful for the well wishes and support of the community who have helped to honor Michael’s memory. Michael’s empathy and love for others are the underpinnings of the life choices he made, choices which eventually led to the loss of his own life for the sake of others. Michael’s loss forever leaves a hole in the hearts of those of us who had the blessing of knowing him the few short years he lived on this earth.

Michael was promoted to lance corporal in March 2010 and deployed in July 2010 in support of Operation Enduring Freedom. His awards include the National Defense Service Medal, Afghanistan Campaign Medal and Global War on Terrorism Service Medal. He was buried with full military honors at the New Hampshire State Veterans Cemetery in Boscawen, NH.