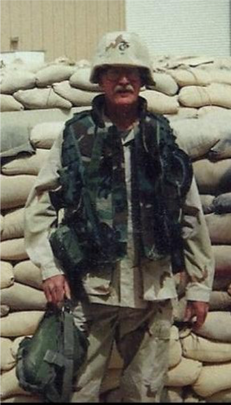 After eight months in Kuwait and Iraq, Dale just wanted to come home and see his wife and two daughters.

Giddy with excitement, the family headed for the airport  in Dale’s cherished “Marine Corps green” truck to pick him up and start what his daughter, Keri, called “a reunion of a lifetime.”

Despite their brief reunion, Dale, his wife Janet and daughters Keri and Stacey,  shared a lot in three hours. They hugged and cried and held hands. Dale shared photos, gave them gifts he had picked up from overseas, and told them stories about the war.

At about 2:30 a.m., after three hours of talking, Dale suggested everybody go to bed since they had the whole weekend to get caught up.
Janet was getting ready for bed when she heard a thump and saw her husband collapsed on the floor. “I came running over to him and I knew something serious was going on,” she said. “He looked at me and said, ‘I love you all,’ and that was the last thing he said.” Dale Racicot died of a heart attack at the age of 54.

Sadly, his active duty was to officially end that week, after he reported to his unit's headquarters in Worcester.
"He was my best friend in the whole world," said his wife. "I married the kind of man most women dream of marrying. I got to have the real thing.”