August 16, 1983 ~ July 8, 2009
Operation Enduring Freedom
3rd Marine Special Operations Battalion, Marine Special Operations Advisor Group,
Marine Corps Forces Special Operations Command, Camp Lejeune, NC
25, born in Candia NH;  killed in action during combat operations in Nimroz, Afghanistan.
Michael grew up in Candia, NH and Florida. as evident early on Michael would be a soldier. “He knew he wanted to be in the military since a very early age,” said his father, Sgt. Michael Roy. “His older brother was in the Gulf War, in the Army.”
He enlisted Sept. 25, 2001, two weeks after the Sept. 11 terrorist attacks and often talked about stopping terrorism, al-Qaida and Osama Bin Laden. “He wanted to protect his country and wanted his children to grow up without war,” said Julie England, a longtime neighbor whose children befriended Michael. England also served as Roy’s home-school teacher for ninth grade.
Michel and his wife, Amy, had three children: Olivia, Mikey, and Landon. After Mikey was born, Michael planned to stay home for a year after his third tour of duty. He was in Afghanistan when Landon was born, but his father said the military granted him a one-week release to visit his newborn.

Though any conversation with a friend or relative of Michael's begins and ends with his service and dedication to his country, he is also remembered by those who knew him as an equally dedicated husband and father. “When he had his kids, oh my goodness,” said England, “that’s all he talked about.” Of his marriage, England said it was clear to her that it was meant to be. “You want to find the one; that was the one,” England said of Michael’s wife, Amy. “They were crazy for each other.”

Michael was a graduate of Academy High School in Fort Myers, partaking in its accelerated program that allowed him to graduate in 2001 at the age of 17. Three months later, he enlisted with the full support of his father. Michael joined the Marines very young, with nearly eight years in already at the age of 25. His decorations and his rise through the ranks tell us he served his country competently and well. His joining the Marine Corps Forces Special Operations Command shows he had no fear. To become a MARSOC member, Michael had to undertake and complete Special Forces training designed to "enable him to function in remote, ambiguous and complex environments with limited support," according to the special unit's website, which also outlines core duties that may be assigned. Those duties include training and assistance to foreign governments, security force assistance, special reconnaissance, counterterrorism and direct action, which the Corps defines as "short-duration strikes and other small-scale offensive actions taken to seize, destroy, capture, recover or inflict damage in denied areas." Michael died in Nimroz province in southwestern Afghanistan. Nimroz was an area of intense unrest where, in April, suicide bombers tried to kill an Afghan minister and killed three others instead. Fighting had been heavy there since the previous year and, according the news reports, the Marines had been heavily involved. Michael was killed by a sniper there during combat operations. He was on his third tour of duty, a week from returning to Camp Lejune. He was wearing full lead armor but the sniper's bullet pierced an exposed area below his helmet.

You couldn’t ask for a better leader as your sergeant,” said Cpl. John Wood, a Marine who served under Michael for his first two tours in Iraq. “You couldn’t ask for a better person. If there was anything you needed, he would take care of you.” "It was a privilege to serve with him because of his dedication and the way he treated his Marines,” Wood said. “It didn’t matter that he was the same age as us — he was our leader.”
​
Michael was trained as a rifleman and was promoted to sergeant on October 10, 2005, joining MARSOC on March 15, 2008. 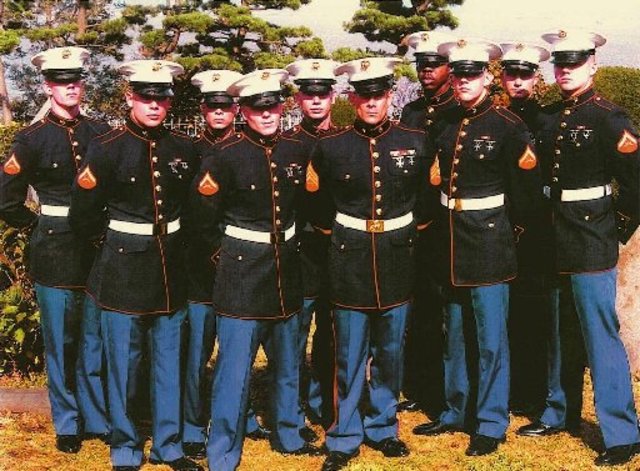